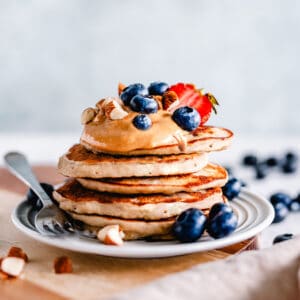 These Keto Pancakes are soft, fluffy and easily made for your next low carb breakfast or brunch. They are made with almond flour and coconut flour, and are completely grain free. If you're looking for allergy friendly pancakes, this is your go to recipe!

Nutrition Facts
Keto Pancakes
Amount Per Serving (1 g)
Calories 122 Calories from Fat 81
% Daily Value*
Fat 9g14%
Carbohydrates 5g2%
Fiber 3g12%
Sugar 1g1%
Protein 6g12%
* Nutrition facts are provided as a courtesy using the WPRM recipe calculator. It is best to make your own calculations to ensure accuracy. We expressly disclaim any and all liability of any kind with respect to any act or omission wholly or in part in reliance on anything contained in this website. Percent Daily Values are based on a 2000 calorie diet.