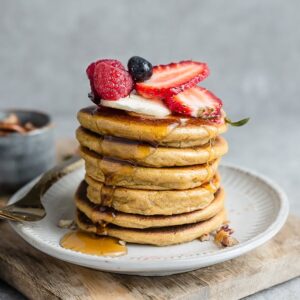 These Paleo Pancakes are light, thick, fluffy and so easy to make in just one bowl. Made with almond flour, almond milk and maple sugar, they are a healthy and delicious grain free alternative to traditional buttermilk pancakes and the perfect breakfast or weekend brunch.

Nutrition Facts
Paleo Pancakes
Amount Per Serving (1 g)
Calories 127 Calories from Fat 99
% Daily Value*
Fat 11g17%
Carbohydrates 5g2%
Fiber 2g8%
Sugar 1g1%
Protein 5g10%
* Nutrition facts are provided as a courtesy using the WPRM recipe calculator. It is best to make your own calculations to ensure accuracy. We expressly disclaim any and all liability of any kind with respect to any act or omission wholly or in part in reliance on anything contained in this website. Percent Daily Values are based on a 2000 calorie diet.