A cinnamon sugar streusel topping layered over an easy pizza dough with a drizzle of cream cheese frosting. The extra special crust is made with cinnamon sugar crust bites which makes this even more delicious and fun to eat. 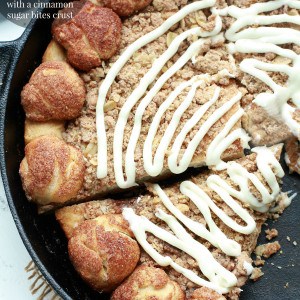 We love pizza night at our house.  It’s so much fun to pile on the toppings and they’re super easy to customize depending on what we all feel like.

We usually make a few small pizzas with different toppings along with one dessert pizza which is our favorite part of the night.

The boys in the family usually aren’t big fans of any kind of pizza crust (even stuffed or pretzels) but they do adore anything doused with loads of cinnamon and sugar.   So for this dessert pizza, I decided to roll up the extra pizza dough to make little cinnamon sugar crust bites and attached them to the pizza using those as the crust.

You guys! It was a BIG hit!  They loved the idea and polished off their plates clean which was amazing and totally helped solve the leftover pizza crust dilemma we always seem to have.

It all starts out with our favorite easy pizza dough.  You can also use your favorite dough or a pre-made dough from the store to make things easier but the 20 minute rise time on this homemade one makes it so worth it with very little effort.

Once you have the dough, we press it into a 9″ cast iron skillet or a pie pan with a slather of melted butter on top.  For this dessert pizza, I wanted to amplify the cinnamon flavor so I used Gay Lea Cinnamon and Brown Sugar Spreadables  which is the perfect blend of cinnamon and brown sugar and it spreads right out of the fridge.

Next, a generous layer of cinnamon sugar oat streusel is piled on top.

Now we get to the fun part!  Just take the extra pizza dough and roll them into bite sized balls — about a 1/2 tablespoon or so.  Once you have enough to cover the outer rim of the pizza crust, dip each bite into some melted  Gay Lea Cinnamon and Brown Sugar Spreadables or regular butter and then roll into a bowl of cinnamon sugar.

Bake it up and then drizzle on some of that delicious cream cheese frosting.

Pizza night just got a whole lot better now that the crust is made out of cinnamon sugar bites.

Plus, this would be great for the kids to make for Mother’s Day too since it’s so easy.   Moms will love this extra special treat ♥♥♥

Now for a fun GIVEAWAY!

To celebrate all of the delicious ways you can infuse Gay Lea’s Cinnamon & Brown Sugar Spreadables into fun recipes, Gay Lea is giving away an amazing brunch kit consisting of one Cuisinart Professional Rotary Waffle Maker, one Cuisinart Conical Burr Coffee Grinder and one Staub En France Cast Iron 10” Frypan!

They are also giving away 1 year of free Gay Lea product (12 coupons for free Gay Lea product) to one of my lucky readers.  This giveaway will be open until April 30, 2015.  All my Canadian readers have to do is let me know what you would make in the comments section.

Enter the Giveaway by opening the link HERE

Both of these reader giveaways have the following rules:

Thanks so much for reading Life Made Sweeter.  You can also stay connected with me on:

Disclosure: I am part of the Gay Lea Ambassador Campaign with Influence Canada and I receive special perks as part of my affiliation with this group. The opinions on this blog are my own.