These Keto Brownies are super fudgy, rich, moist and thick with a chewy center and crispy edges. This low carb brownie recipe is so easy to make with no sugar and almond flour in under 30 minutes. Paleo, gluten free and the perfect way to satisfy that chocolate craving. 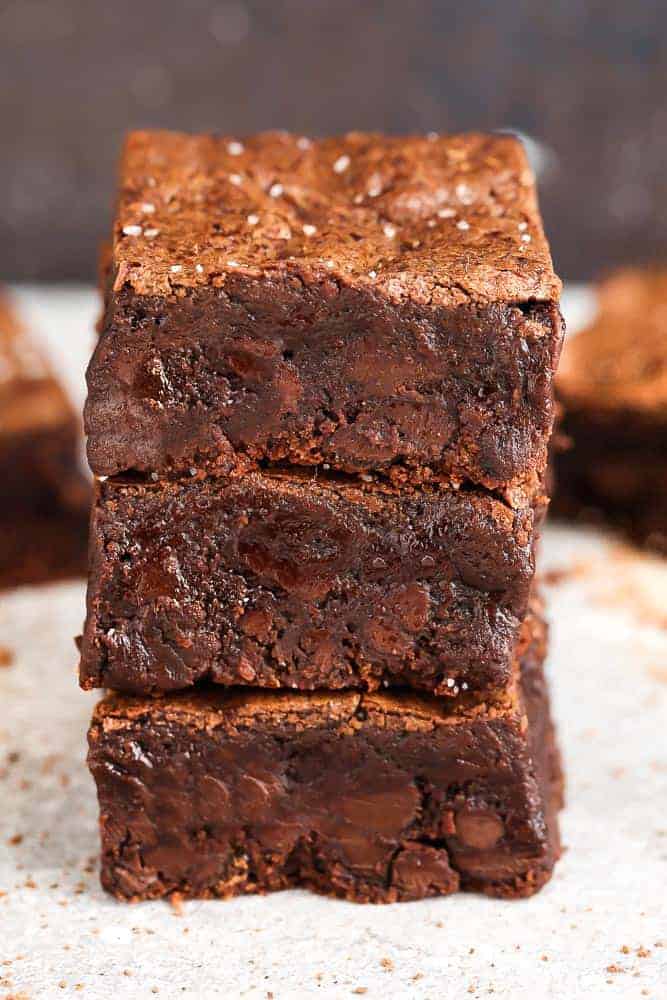 Ever have those days when nothing else will do to satisfy that sweet tooth except for a thick and fudgy brownie? If you’re on the hunt for the world’s best keto brownies, this keto brownie recipe made with almond flour happens to our absolute favorite.

My husband is a self-proclaimed chocoholic and grew up on box mix brownies. Over the years, I’ve tested out at least 20 of the best brownie recipes and am always trying to come up with a sugar-free version that taste just like a regular brownie.

And you know what? Just like my Low Carb Chocolate Chip Cookies and Keto Peanut Butter Bars, he had no idea these gluten free brownies were made with healthier ingredients. 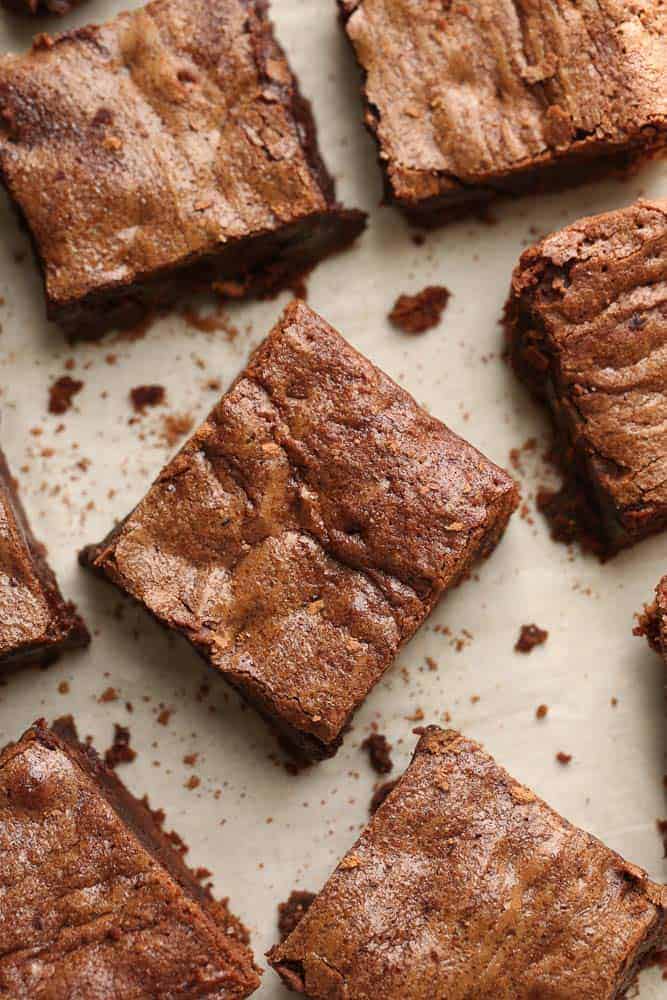 What I love about this homemade brownie recipe is that they are super rich, fudgy with the perfect crispy edges that just melt in your mouth.

I made a batch to give away to our friends who were visiting and they always save half for a midnight snack or anytime they’re craving something sweet or chocolatey.

CAN I HAVE BROWNIES ON KETO?

Since our almond flour brownies are grain free with no added sugar, you can absolutely eat grain free brownies even if you’re following a ketogenic diet. Like anything else, just remember as long as you are not eating the entire pan and it fits your macros.

HOW MANY CARBS ARE IN SUGAR FREE BROWNIES?

One of the reasons we love these paleo brownies is that they are macro-friendly. 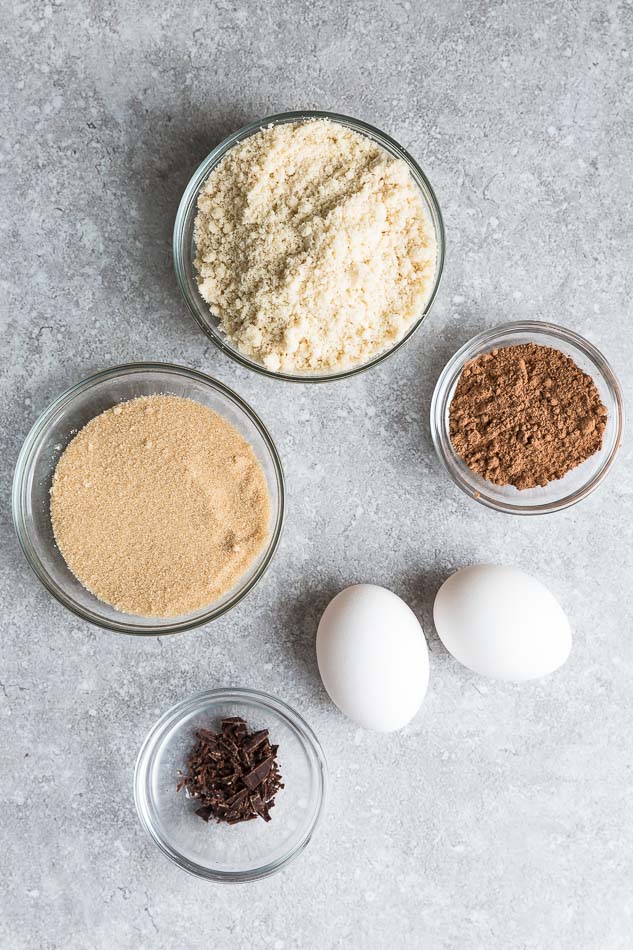 Regular homemade brownie recipes are typically made with a combination of butter, all purpose flour and sugar.

Since this is a sugar free brownie, our recipe for the best keto brownies is made with the following ingredients (some affiliate links included): 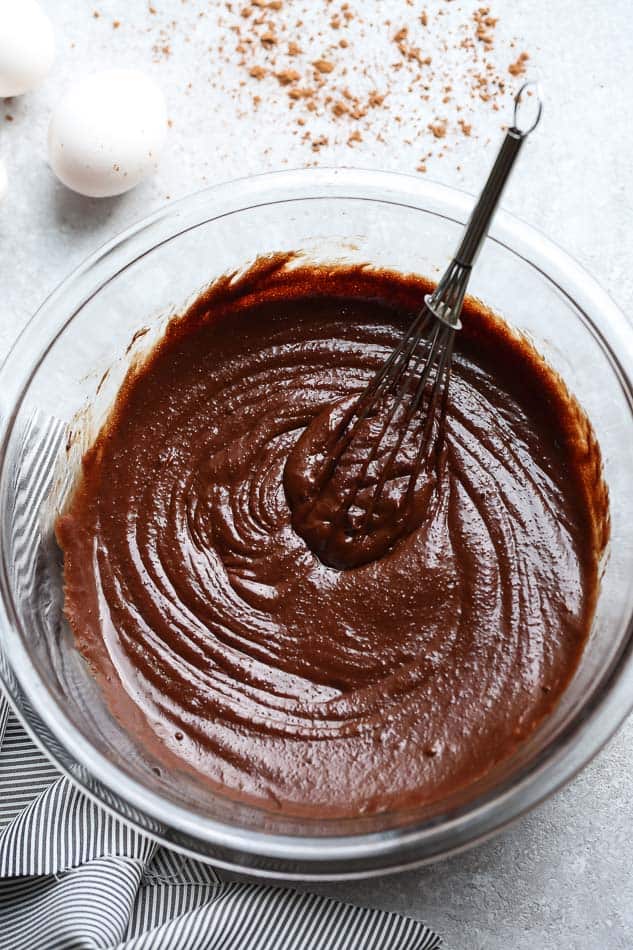 HOW TO MAKE KETO BROWNIES: 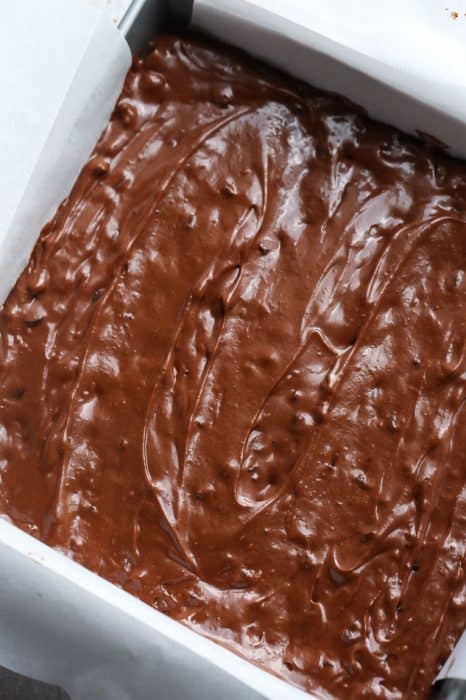 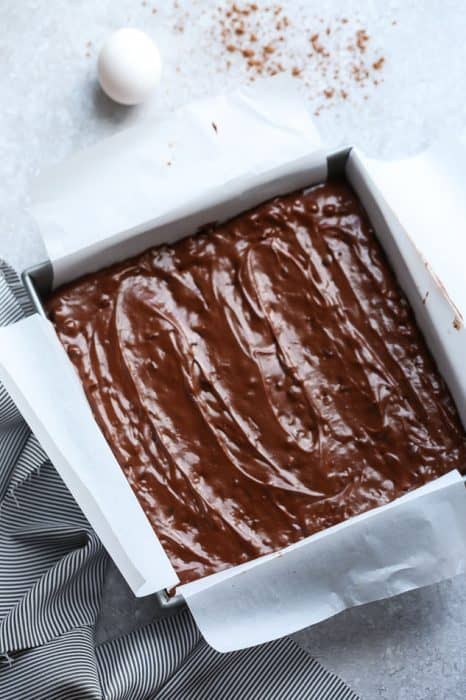 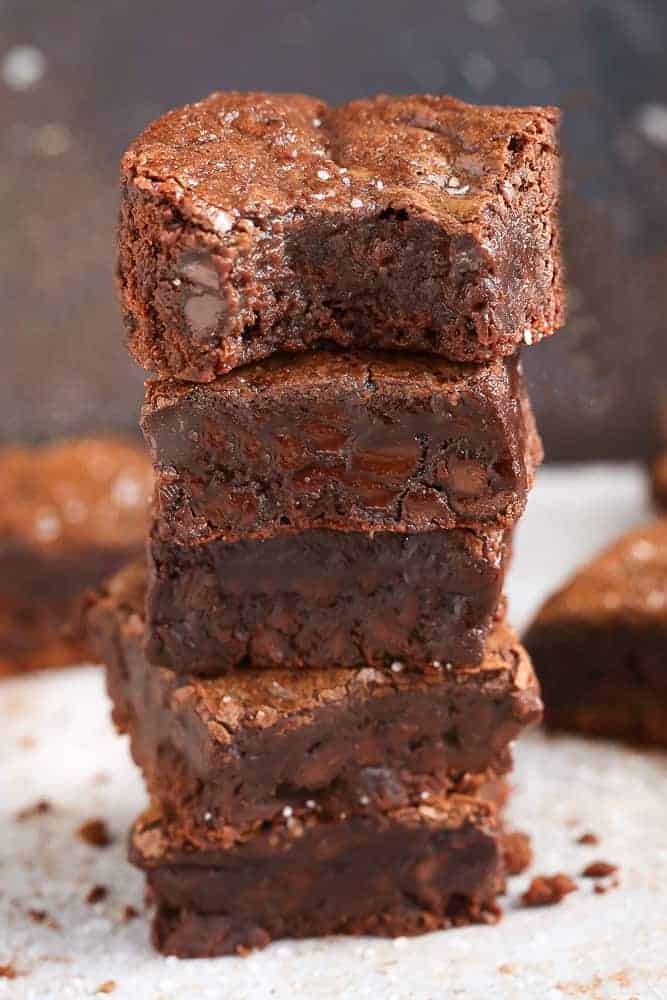 For this recipe, I used Lakanto Golden Monk Fruit Sweetener since it mimics the taste and texture of brown sugar. I have not tested this recipe with other sugar replacements, but you can try using SWERVE or erythritol if those are your preferred sweeteners. 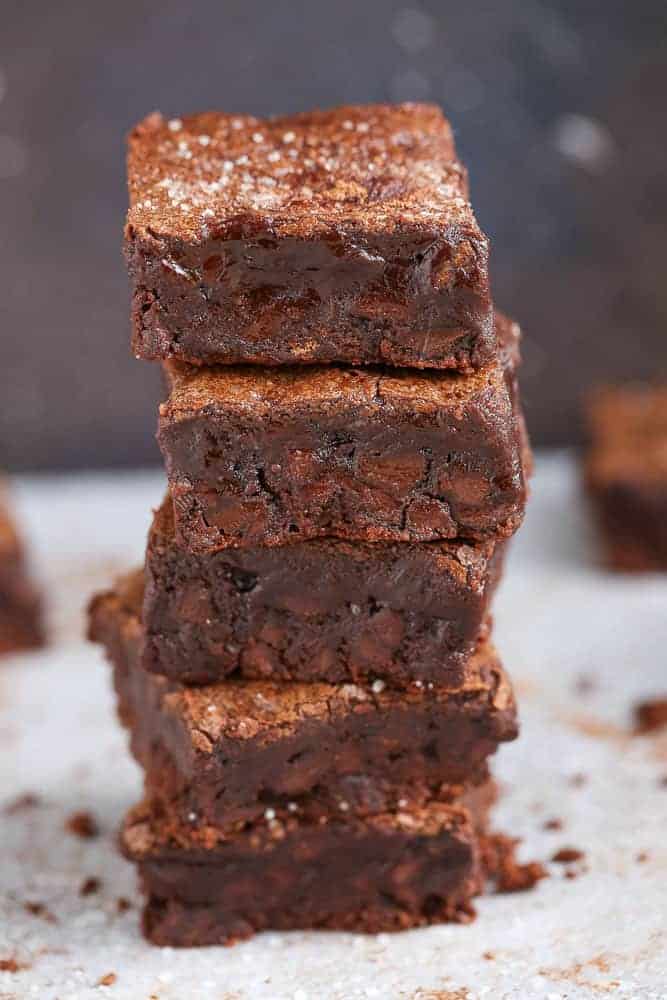 We use a combination of no sugar chocolate and cocoa powder to give these paleo brownies the ultimate chocolate flavor. Do not leave out the chopped chocolate as it also gives the brownies those gooey centers but it also

HOW TO CUT FUDGY KETO BROWNIES: 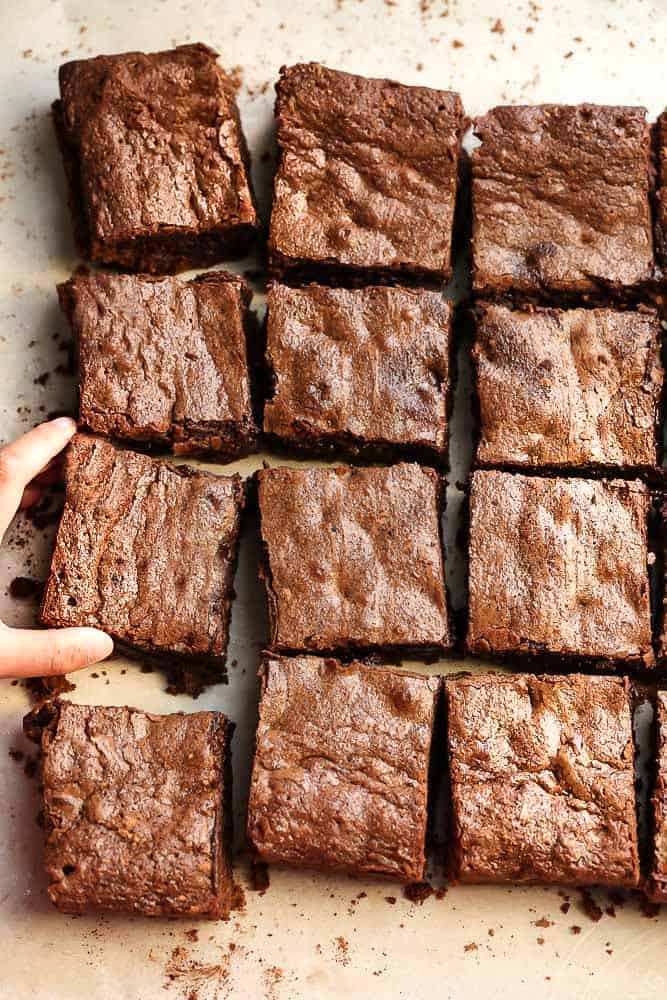 To get perfectly sliced brownie squares that won’t crumble:

HOW TO STORE FUDGY PALEO BROWNIES:

Low carb brownies can be stored on at room temperature in an airtight container for up to 3 days. My family thinks they taste even better the next day! 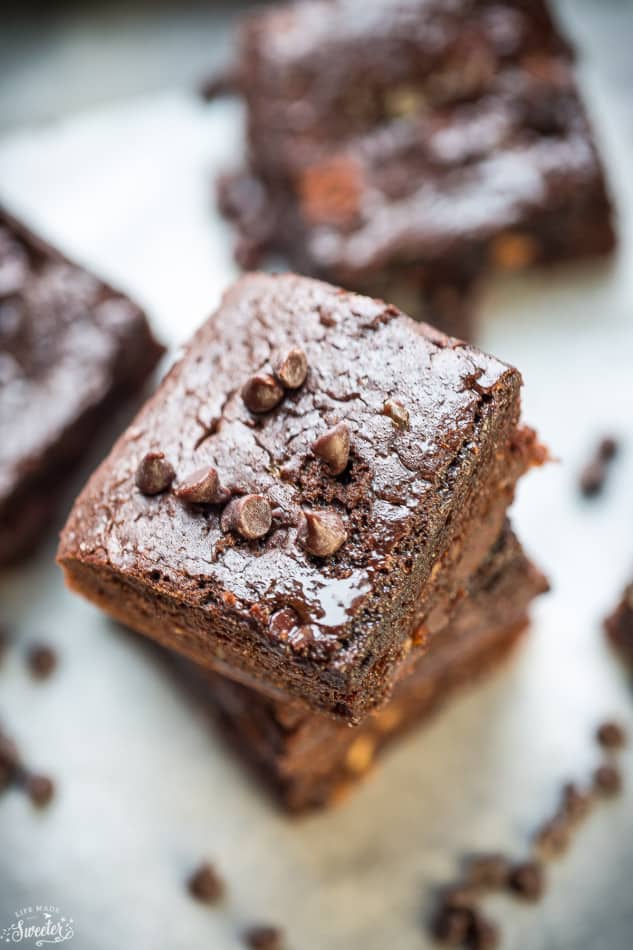 CAN I FREEZE HOMEMADE BROWNIES?

Absolutely! To freeze low carb brownies, you’re going to place the entire brownie pan (this works for cut and uncut slices) in the freezer for 15 minutes or until they’re firm. Next, you’re going to wrap the pieces in foil and store them in an airtight container or a large plastic freezer-bag in the freezer.

HOW LONG ARE FROZEN BROWNIES GOOD FOR?

HOW DO I THAW FROZEN FUDGY KETO BROWNIES?

To thaw brownies, remove them from the freezer and allow to thaw completely before removing the wrapping.

HOW ELSE CAN I SERVE SUGAR FREE BROWNIES: 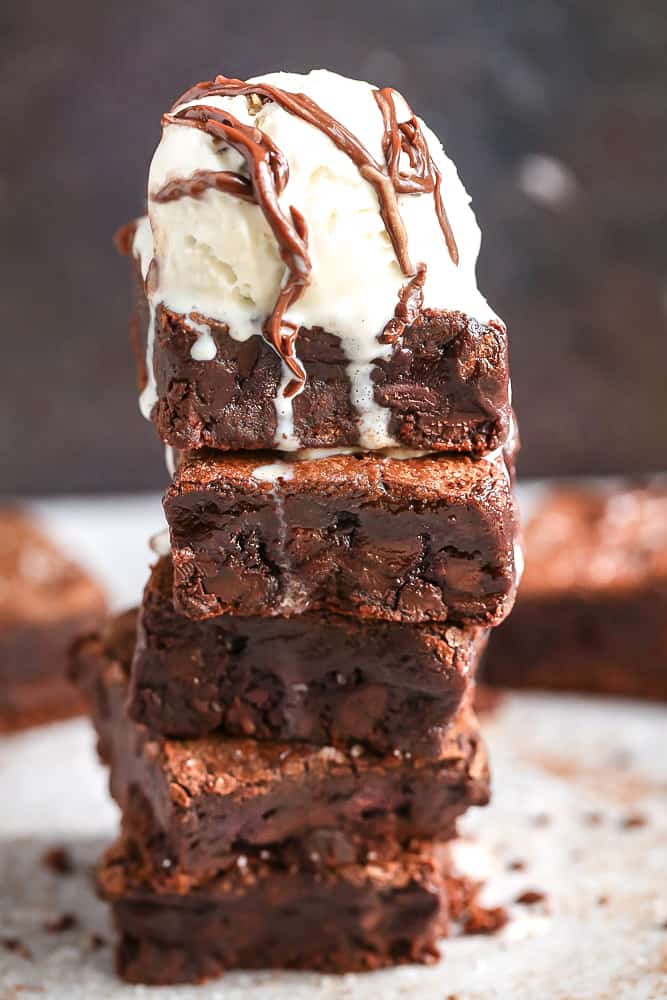 You can add nuts, no-sugar added chocolate chips, a layer of sugar free buttercream frosting or with a scoop of your favorite low carb ice cream. 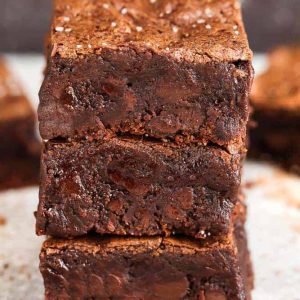 These Keto Brownies are perfectly fudgy, gooey and thick with a chewy center and crispy edges. Easy to make with low carb pantry ingredients.

Course: Dessert
Cuisine: American
Keyword: brownies, keto, low carb, sugar free
Servings: 16 squares
Calories: 128 kcal
Author: Kelly
Ingredients
Instructions
Nutrition Facts
Keto Brownies
Amount Per Serving (1 square)
Calories 128 Calories from Fat 108
% Daily Value*
Fat 12g18%
Carbohydrates 5g2%
Fiber 2g8%
Sugar 1g1%
Protein 3g6%
* Nutrition facts are provided as a courtesy using the WPRM recipe calculator. It is best to make your own calculations to ensure accuracy. We expressly disclaim any and all liability of any kind with respect to any act or omission wholly or in part in reliance on anything contained in this website. Percent Daily Values are based on a 2000 calorie diet.